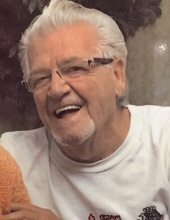 Richard Eugene Oliver (Olver) was born August 11th 1944 in Black River Falls Wisconsin. He passed away at the age of 73 on February 5, 2018 at Hope Creek after an extended battle with cancer surrounded by family. His final hours were calm, peaceful and loving.
Rich grew up the youngest of seven siblings. As a young man he left home and went to work with his older brother and learned his trade as an upholsterer. Rich was incredibly talented. He and his brother Bob moved to The Quad cities where they eventually opened their own upholstery shop in Rock Island where they worked side by side. Rich built a reputation for exceptional quality and excellent customer service.
Rich loved his family and was well known in the community as a good friend with a generous and fun loving nature. He loved to shoot pool, play chess, and loved socializing with friends.
Rich loved all genres of movies and enjoyed unconventional music. He loved to run errands listening to Ladysmith Black Mambazo.
In his later years Rich was known as a good friend and was always willing to go out of his way to help the residents in need. In spite of a tragic fall, he was fiercely independent and was unwilling to live a life that was not on his own terms. Even as he left this world he made sure to let the nursing staff and his family know that he was going to do it his own way. This was illustrated a couple of days before he passed with him leaving his bed to go to the casino, and the very next day on a mission to help a friend in need in spite of been unable to walk for the past few months. Rich was many things; a working man who's right hand showed years of hard and honest work in the field he loved; A humble man who's generosity to others surpassed his own abilities. The father of seven whom all possess their fathers brass and tenacity. A dear friend to many including one of his dearest friends Tommy Carpenter Who's gentle encouragement and example brought him back to the Lord.
Richard was preceded in death by his parents Cecil and Marie Olver and by his six siblings Jerry, Ronald, Della, Robert, Phyllis, Farrell and his dear friend Tom Carpenter.
He is survived by his children, Richard Olver Jr, Randy Olver, Terry Oliver, Troy Olver, Jaci (Doug Kelly) Olver,
Danielle (Korey Minard) Borglum and Amber(Josh) Howat; ex spouse Brenda Oliver, many grandchildren, great-grandchildren and his close friend Randy Allison.
A celebration of life will be held at Heritage Woods assisted living on Saturday, February 24of 2018 from 2 to 4 PM.

To order memorial trees or send flowers to the family in memory of Richard Oliver, please visit our flower store.