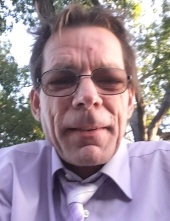 Rich was born August 6, 1967 in Fort Leonard Wood, MO the son of Richard (Dick) and Ellen (McKinney) Houston. He worked as a drywall finisher for 30 years, most recently at Premier Plaster & Drywall. He enjoyed riding quads with his son and friends - especially when it was muddy. He enjoyed his pet parrots, teaching them to talk and often taking them along to family events. He had a passion to make a car booming with an awesome audio system.

Rich was preceded in death by his paternal and maternal grandparents, brother-in-law Greg Spurgeon and favorite parrots Bob and Joey.

A celebration of life will be 1pm Sunday, February 24, 2019 at American Legion Post 26, 702 W 35th Street in Davenport. In lieu of flowers, donations may be made to the family.

To order memorial trees or send flowers to the family in memory of Richard Houston, Jr, please visit our flower store.