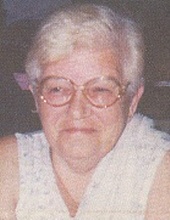 Per her wishes she will be cremated and there will be no services. Quad Cities Cremation Center is assisting the family with arrangements.

Peggy was born Dec. 27, 1933 in Cainsville, MO the daughter of Herbert McLaine. She married Robert McDonough Jan. 10, 1953 in Davenport. Peggy retired from Brocks Candy Co. in 1992. She enjoyed playing bingo and cooking.

Survivors include her daughters Sherri McDonough of Bettendorf and Mary Tomsha of Davenport; numerous grandchildren and great grandchildren.

Peggy was preceded in death by her parents; 1 son; 1 daughter; 4 sisters and 1 brother.

To order memorial trees or send flowers to the family in memory of Peggy McDonough, please visit our flower store.