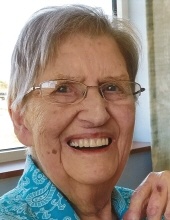 Per her wishes there will be no services. Quad Cities Cremation Center is assisting the family with arrangements.

Marie was born in 1924 in Forsyth, MO the daughter of Charles and Tisha Morgan Cook. She married John Manning Nov. 29, 1942 in Missouri. She loved to sew and enjoyed going to the boats.

To order memorial trees or send flowers to the family in memory of Marie Manning, please visit our flower store.