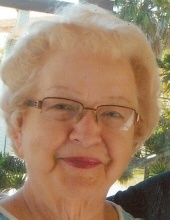 A celebration of life will be 12:30-2:30pm Friday at City View Celebrations at Trimble Point in Moline. Burial will be private at Greenview Memorial Gardens in East Moline. Memorials may be made to Clarissa C. Cook Hospice House. Quad Cities Cremation Center is assisting the family with arrangements.

Judy was born Feb. 16, 1942 in Moline, IL the daughter of Robert and Annetta Brown and was raised by her mother Annetta and step father Kenneth Hites. She married Lewis A. Windland June 18, 1960. He preceded her in death June 11, 2017. Judy was an LPN who worked in Obstetrics at both Illini Hospital in Silvis and Finley Hospital in Dubuque. She later worked in Pediatrics at Illini Hospital. She was a very generous person who loved birds and flowers. If you wanted to make her smile, have a grandchild walk in the room.

To order memorial trees or send flowers to the family in memory of Judy Windland, please visit our flower store.