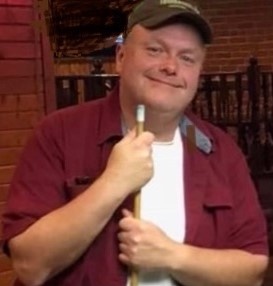 He was a graduate of Rock Island High School and obtained a Bachelor Degree in Art from Northern IL University in DeKalb, IL

Howard’s favorite art to create was pencil stippling.  He also loved writing and was creative in many other ways.  His favorite hobbies were collecting books, critiquing movies and TV shows, and spending time with friends.  He loved his four-legged friends too and would jump at opportunities to dog sit (one should plan on their pet coming back home spoiled after a week with Howard).

Howard spent a large portion of his career at Boarders Bookstore and most recently he was the Bookstore Manager at Black Hawk College in Moline, IL. Howard was a Man with a big, big heart, he jumped at any chance to help others, rescue a pet in need or lend a listening ear.  He was the most empathetic guy we had ever known. He joined the Catholic Church in April of 2021.

Howard was preceded in death by his mother; Patricia K Olson and his grandparents, William and Thelma (Maxwell) Olson. Survivors include his cousins Jessica Tapia-Mier (Bryan) Davenport, IA and Michael Tapia, Davenport, IA. his Beagle -Sam, Chihuahua -Spot, 2 cats, and many friends who loved him,

Howard will be cremated and will have a Christian burial at a later date, where he and his Mother will be side by side,

To order memorial trees or send flowers to the family in memory of Howard Olson, please visit our flower store.