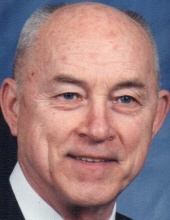 Memorial services will be 3pm Saturday at Zion Lutheran Church in Davenport with visitation from 1pm until service time. Memorials may be made to the church. Quad Cities Cremation Center is assisting the family with arrangements.

Jerry was born July 22, 1931 in Muscatine, IA the son of James and Lokadya "Nellie" Grady. He attended UNI formerly known as Iowa State Teachers College on a basketball scholarship, graduating in 1953. He obtained his Master's Degree from Colorado State. Jerry was drafted into the Army during the Korean Conflict. He married Barbara Freeman June 10, 1956 in Ottumwa, IA. He worked as the Principal of Lincoln School in Savannah, IL for 8 years before moving to Davenport in 1964. He taught science at Williams Jr High until his retirement in 1993. He coached basketball, wrestling and football until 1972. Jerry was a member of Zion Lutheran Church in Davenport since 1964, serving several terms on the council, was on the Mutual Ministry Team and served at the food pantry. He enjoyed sports, continuing to play fast and slow pitch softball for several years. He enjoyed traveling with his wife Barb of 61 years spending time in all 50 states, Canada, Mexico and traveled abroad to more than 11 countries. Jerry especially loved spending time with his family.

Survivors include his wife Barbara; sons Mark (Sandy) of Fox Pointe, WI, Scott (Zandra) of Leesville, LA and Todd (Julie) of Davenport; 7 grandchildren and a sister Nancy Franklin of Muscatine.

Jerry was preceded in death by his parents; brothers James Jr. "Bud" and Marlin "Lanny" and a granddaughter Selena.

To order memorial trees or send flowers to the family in memory of Gerald Grady, please visit our flower store.