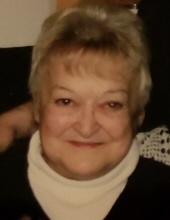 Donna M Sanders, 74, of Clinton, IA passed away May 19, 2019 from an extended illness.
Private family memorial will be held at a later date. Quad Cities Cremation Center is assisting the family with arrangements. Memorials can be made to American Cancer society in her name.
Donna May Graham was born September 12, 1944 in Fulton, IL to George James Graham Sr. and Mary Katherine Hitchcock Graham. Donna was a proud Union member at Collis Company in Clinton where she eventually retired. Donna had several interests she enjoyed but a few of her favorites were spoiling her beloved dog Taffy, feeding her hummingbirds, crocheting pineapple doilies, and watching her favorite NASCAR race drivers on the tv. She will be greatly missed by all of whom loved her.
Donna is survived by sisters Marion Bloom of Tennessee and Maryann
Pickrell Saathof of Illinois; three children and their spouses Gloria (Kevin) Lannan Clinton, IA, Robert Sanders, Moline, Illinois, and Sandra (Kodey) Dolen, Bettendorf Iowa, as well as 7 grandchildren, 6 great grandchildren and several nieces and nephews.
Donna was preceded in death by both of her parents; brothers George, Irven, Paul, Freddy and sister Ruth.

To order memorial trees or send flowers to the family in memory of Donna Sanders, please visit our flower store.