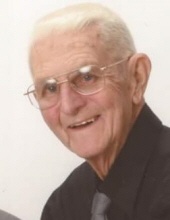 Per his wishes, cremation rites have been accorded and a celebration of life will be held Thursday, May 31, 2018 from 4 - 8 pm at the East End Club in Moline. Private burial will be held at a later date at the Rock Island National Cemetery.

Charles was born August 25, 1930 in Moline the son of D. Raymond and Helen Burke Titus. He married Donna Mortensen Feb. 4 1961. Charles was self-employed and retired after 32 years with U Haul after. Charles served in the United States Army and is a Korean War Veteran. He enjoyed socializing as a business associate and was a workaholic. He too worked a long his wife's side at the Apple Valley Boarding Kennel, where he was often referred to as "Grandpa".

Charles was preceded in death by his parents and a brother Ron.

To order memorial trees or send flowers to the family in memory of Charles Titus, please visit our flower store.