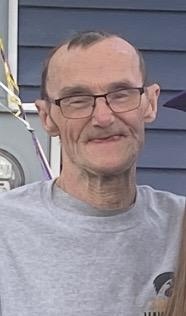 Muscatine, Iowa- Charles “Chuck” Jacob Johnson, 74, of Muscatine, passed away peacefully on Saturday, January 22, 2022, in his home, surrounded by family. A celebration of life will be held at a later date. Charles J. Johnson was born on February 14, 1947, in Muscatine, Iowa to Glen Johnson Sr. and Emily (Busch) Johnson. On June 12, 1965, Charles was united in marriage to Clarice Fuller. He started working at Heinz when he was 16, where he retired from many years later. He enjoyed gambling with his wife and picking on his grandkids. Charles will be deeply missed by his wife; three daughters, Vicki Johnson, Valerie Shuman, and Kelly Johnson, all of Muscatine; 8 grandchildren, Alicia (Garrett) of Sully, Iowa, Nataleigh, Zachery, Levi, Hannah, Michael, Haleigh, and Jadelyn, all of Muscatine; and two siblings, Harry Johnson and Charlotte Esmoil, both of Muscatine. He was preceded in death by his parents; 8 sisters, Carolyn Freyermuth, Irma Voeltz, Carol Brockert, Sandra Campbell, Donna Wheeler, Mary Ann Brown, Sharon Musgrove, and Mina Suhl; two Brothers, Glen Johnson Jr, and John Johnson; and a Son in Law, Donald “Scott” Shuman

To order memorial trees or send flowers to the family in memory of Charles Johnson, please visit our flower store.