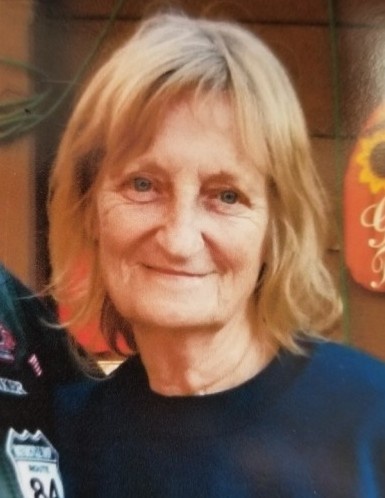 Bernadine Marie Barth grew up in the town of What Cheer, Iowa during the 1940s and 50s. Although she was born in Minnesota in 1940, her parents Margaret and Jerome moved their family back to Margaret’s home town to be closer to her family. Bernie was the second of four siblings. Her eldest sister Bonnie as well as her younger siblings David and Sherrie remained close with Bernie both in proximity as well as in their shared love for each other and their collective families throughout their lives. Bernie grew to be a vibrant young woman with blonde hair and blue eyes who had a great sense of humor and could talk for days.

She gave birth to her only child when she was 18 years old. Rusty Allen was the son of Bernie and Edwin Powell and was the light of Bernie’s life. Bernie and Ed raised their little family in a modest home on 23rd avenue in Rock Island, Illinois, not far from her baby sister, Sherrie and her mother, Margaret. Bernie worked as a letter carrier for a time and spent countless years working for local elementary schools in various capacities. She loved staying busy, working with her hands and caring for her home, her garden and her family. She loved gardening and she loved animals (namely cats and beagles) and shared that love with her son and eventually her grandchildren.

Bernie had 3 grandchildren, Chrissy, Doug and Mandy and she played a very large role in helping to raise them. She was also instrumental in the lives of her cousins, nieces and nephews. She was always involved and concerned with the health and happiness of everyone in her family and was famous for responding to “I love you” with “I love you better.” Her 3 grandchildren gave Bernie 8 great-grandchildren, all girls, whom she adored.

Bernie had a special ‘way’ with the animals she shared her life with. Among the pets she loved dearly were her cats: Tom, Sam, Dobey, Tater and Furby. There were also a few beagles that won her heart over the years, namely Maggie Mae and Banjo, whom she absolutely adored. She was also known to keep a ferret or two as well as a small, potbellied pig, which she loved until he was too large for her to continue to carry. In her later years she mothered numerous stray cats in her neighborhood, even going so far as to catch them and have them spayed / neutered. Her passion for her strays brought her closer to her friend Laura Davis, who helped Bernie care for her stray friends for several years.

Bernie had many loves in her life. She was married and widowed to Ed. She fell in love with a rambunctious fisherman named Ken that was a fixture in her life for a long time. But the man who loved her unconditionally was Ray Logsdon. In Ray’s eyes, Bernie could do no wrong. Their time together was spent enjoying each other’s company. Whether riding on Ray’s Harley to family gatherings or enjoying evening walks at Sunset Marina, Ray and Bernie shared a special bond that was a wonderful example of how love can find you at any point in your life.

The void left by Bernie’s passing is indelible. After receiving her cancer diagnosis there wasn’t a moment where she was not surrounded by someone who loved her. Morning check-ins, mid-day talks and afternoon / evening visits became normal for the members of her family who wanted to repay the love she has spent on them throughout their lives. She was truly loved and it could be seen by all of the care she received in her last few months on earth. We will always feel her in our hearts and hold her close in our memories. Bernie was preceded in death by her mother Margaret, her Father Jerome, her husband Ed and her pets Tom, Sam, Dobey, Maggie and Banjo.

To order memorial trees or send flowers to the family in memory of Bernadine Powell, please visit our flower store.